Language and angst, fear of the unknown 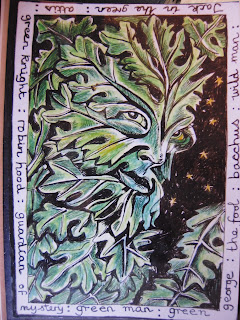 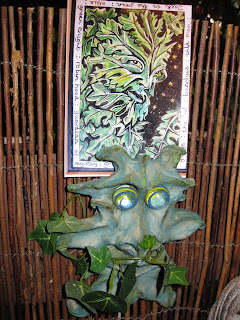 Green Men by Susie Mallett, 1999 and 2009
Whatever do Germans think about England?
My German acquaintances often comment on things that they find rather odd about my homeland, things like the state of English food or the separate taps for hot and cold water.
I often wonder what they ate while over on the island. When I have eaten English food in England I have never found anything to complain about especially when eating at my sister’s house or with my niece or nephew and their families.
As for the taps, yes, they are different. There are only mixer taps in Germany.  I do not quite understand what their problem is here except that with two taps you have to use the plug to get warm water but, probably, by doing so actually save water.
Something really shocking from England
Each night before bed I read the The Telegraph online. Sometimes I just run through the headlines and pick one or two articles to read, sometimes I get really stuck in and read it just like I do my paper version of the Weekly Guardian, word by word for hours.
Last night I just went through the headlines and something “German” caught my eye, in the same way that things “Hungarian” catch my attention or things “Norfolk”:
http://www.telegraph.co.uk/foodanddrink/pubs/9027919/Retired-Beefeater-ejected-from-pub-for-speaking-German.html
When I read this report I immediately thought about how this dreadful event really would give my German friends something to discuss, even complain about. I was shocked and I was both surprised and pleased to read that the police had been involved immediately when the incident occurred and that an official complaint had been made.
What is the world coming to?
I still can hardly believe what I read in this article. I now begin to wonder how careful I will have to be in the future when I am at home. What I wonder will happen when I meet my conductor friends, many of whom share the three languages that I speak. We could, as we often do, lapse into a language other than English. This is so easy to do, it happens quite unconsciously and sometimes we use three languages in one sentence!
Very scary! I hope very much that this is an isolated case.
Notes
The Telegraph -
http://www.telegraph.co.uk/foodanddrink/pubs/9027919/Retired-Beefeater-ejected-from-pub-for-speaking-German.html
Posted by Susie Mallett at 12:06

Whooo... what a shocker! I doubt that we will have heard the end of this.

It is interesting to see how the middle-brow, Middle-England press relate to this. The country cannot be all bad, tell your friends.

By the way, the Daily Mail has the nicest pictures:

And the local rag the fullest coverage.:

Thank you for the other links.

I hope you are right Andrew, that the country cannot be all bad.