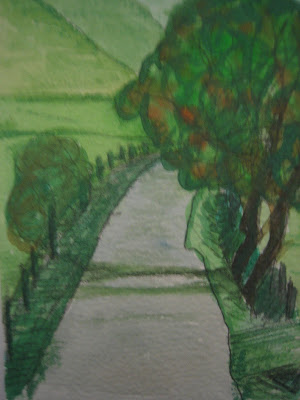 " Path in northern Germany", by Susie Mallett, 2008
In August 2009 I took a day off from work and went on a regional train, a double-decker, to Schwabische Hall in search of an exhibition of the work of an old favourite of mine, David Hockney. One of my first art tutors had known him before he became famous and introduced me to Hockney’s work early on in my arty life. I remained a fan, collecting books of his work and I have always enjoyed dipping in to them and admiring most of all the drawings, but also the vibrant colours of his painting.
I remember the joy I had in viewing the photographic collages and the  Grand Canyon paintings both of which he also made on a grand scale. I remember seeing the stage designs for The Rake's Progress and wondering whether theatre design was a path that I should take with my art training.
Now I remember the awe with which I viewed the recent exhibition in Schwabische Hall and how the colours and shapes in Hockney's most recent works inspired and delighted me more than any other work of his that I have seen. I felt like I was there, painting beside him, watching the landscape change with him as the clouds moved over the sun, as the sun sank low in the sky, as the seasons changed and as the chain-saws marched in!
I wrote about that 2009 journey and the exhibition here:
http://www.susie-mallett.org/2009/08/bewtiched-in-fairyland.html
David Hockney is all over the British press at the moment because this same exhibition A Bigger Picture, with I expect some newer works included, can be seen in London at the Royal Academy. It has made quite a splash!
Even though I have seen these paintings in real life in that small town in Germany, I would love to see these big pictures displayed in the grand environment of the Royal Academy. The cathedral-like avenues of trees must look so majestic in their new setting.
Perhaps I will make it to the UK before the exhibition ends on April 9th. If not, I still have my catalogue to drool over and my memories of that lovely day off in August 2009.
David Hockney, A Bigger Picture at the Royal Acadamy, London -
http://www.telegraph.co.uk/culture/culturevideo/artvideo/9018846/David-Hockney-A-Bigger-Picture-at-the-Royal-Academy-video-tour.html
David Hockney, official website -
http://www.hockneypictures.com/current.php
Posted by Susie Mallett at 18:15