A new book and an old posting

The book I have been reading recently is Admissions, a Life in Brain Surgery by Henry Marsh, published this year by Weidenfeld & Nicolson. I read the first part of his autobiography, Do No Harm, when it came out in 2014 and I was thrilled to find the second part while I was travelling this summer, it is in that lovely big airport paperback format too which is even better!

Admissions is in my opinion just as interesting as Do No Harm.

Here is a paragraph from Admissions, in a section of the book where Henry Marsh was recalling how he feels while watching young inexperienced surgeons operating, that caused me to mark the page as I was reading –

“But it is very easy to under estimate the importance of endless practice with practical skills. You learn them by doing, much more than by knowing. It becomes what psychologists call implicit memory. When we learn a new skill the brain has to work hard – it is a consciously directed process requiring frequent repetition and the expenditure of energy. But once it is learnt, the skill – the motor and sensory coordination of muscles by the brain – becomes unconscious, fast and efficient.”

I was reminded on Monday of the posting below that is about another of my favourite writers.
I have just copied and pasted it here with no editing so I hope it keeps it’s format and that there are not too many mistakes! 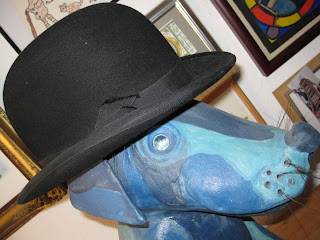 "The Blue Dog Who Mistook Himself for a Gentleman"
by Susie Mallett, 1998

I have read many books of your books, I think probably bought everything that you have written, since I first discovered The Man Who Mistook his Wife for a Hat, in 1986.

I had been an art student, but by the time that I read this book of yours I was already working as an art therapist. Still, I think that I bought that book for its wonderful cover, an illustration by Paul Slater after a favourite Magritte painting of mine, The Treachery of Images, rather than for its contents. At that time I knew absolutely nothing about you and your work, or your delightful way of describing it all.

Since that first reading of that “Magritte book” I was hooked and I have been buying your books regularly ever since. Now I buy for the content not because of my attraction for the covers! I must admit, though, that sometimes it is the mind-catching titles that first attract me. An Anthropologist on Mars could not be left un-purchased, and My Mind’s Eye caught my eye immediately last weekend, at the railway station. Even without opening it I just knew that I had to read it.

Each time that I have seen a new publication with your name on it I have bought it, even if you are mentioned only because you have written the Foreward.

I am at this moment in time enthralled by your descriptions of stereoscopy and prosopagnosia in my latest discovery. I am amazed, although I am not really sure why I should be, at how much insight your words are giving me into the problems of the nine-year old spastic-diplegic children and the sixty-year old stroke victims who are among my present clients and the problems that they have with their own visional interpretations of their worlds.

I am not sure whether they have exactly the problems that you are describing, but even so my eyes are opening even wider to all the possibilities that I must take into account when I work with them.

As I wended my way to work this morning, reading your book as I walked and writing notes in my head at the same time, I was thinking about you and how you bring your own personal experiences into your writing to help describe your client’s problems and their roads to recovery.

It was while walking to work and having so many parallel thoughts that I decided to write this sort of imaginary letter to you. I got out a pencil and paper and began straight away, with the autumn sun on my head and the crunching leaves below my feet.

I was thinking about how you probably would have been lost by now if you had walked from the bus-stop to work with your nose in a book, so appalling is your sense of direction. More important were my thoughts about how inspiring your writing is for me. I expect that it inspires many others too.

I walked into the room where I was going to work this morning and immediately announced to my colleagues that they really would have to find your book in whatever language was easiest for them, (I am English, my colleagues are German and Hungarian and we work in Germany). I believe that even if they only read the middle part of The Mind’s Eye they would learn a lot more about and reach clearer understandings of their clients.

I realised a long time ago that I benefit not only from the information that is in your books but also that the style in which you express it has influenced, motivated and inspired me most of all for so many years.

I wrote my first case-study when I was a newly fledged teacher in Basingstoke in 1988. The report was later praised for its precise detail by my head-teacher, who had needed it for a local-authority decision on a child’s placement.

That report was written three years after I had read The Man Who Mistook his Wife for a Hat. It was a few years later, when I was writing about my observations in conductive settings, that I realised that I actually enjoyed writing these down and that really what I was doing was painting pictures with words, in a way similar to you do in your wonderful case studies.

Now, twenty-five years after reading that book and more than twenty since I wrote that first case-study, I am enjoying writing my blog and still being inspired by your books.

Thank you Dr Sacks, I hope there will be many more case-studies and books to come.

His books in my library –

Migraine
Awakenings
The Man Who Mistook his Wife for a Hat
A Leg to Stand On
An Anthropologist on Mars
Seeing Voices
Island of the Colorblind
Uncle Tungsten
Oaxaca Journal
Musicophilia
The Mind’s Eye
With a Foreward by Dr. Oliver Sacks - Phantoms in the Brain by Dr. V.S. Ramachandran and Sandra Blakeslee
Posted by Susie Mallett at 21:39