Harmony at the Pető Institute, from 2011 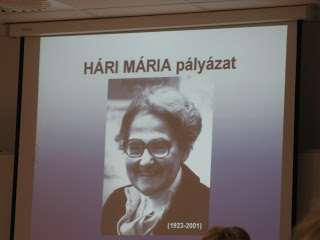 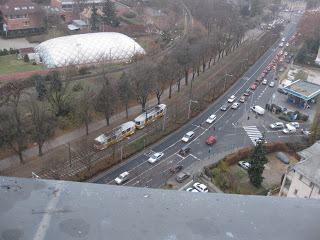 Yesterday, during a break from work, I was talking to a Hungarian colleague and describing to her my last very enjoyable experience of a conference day at the Pető Institute. I had forgotten that I had written about the day that I was describing here on my blog.

I did a search of my blog discovering that I had written it exactly five years ago to the day.

I enjoyed re-reading it, it has a very positive and and excited air about it so I decided to  repost the whole blog here.

It was a bleak November day in 2011 when I took the photographs from the hotel window showing the Cog-wheel Railway terminus, which takes one to the beginning of the Children's Railway, with the chacteristic yellow trams trundling by.

I hope that we get some brighter and crisper December days when we are there for the 9th World Congress.

It is encouraging to read that so many people are expected to attend WCCE9 that a larger venue has had to be found.

Harmony at the Pető Institute

An international conference at the András Pető Institute of Conductive Education

And what a wonderful atmosphere there was.
This was not only my opinion, I heard a German visitor describing how cold and dull such conferences can feel in Germany. He was absolutely right, they can also be a bit icy back ‘home’, but the PAI got it just right at this Hungarian Science Festival 2011 event.

Of course I am rather biased.

A singing soul at the PAI

My soul was singing as I walked past the cog-railway terminal and up Kútvölgy, past János Kórház and the other hospital, the name of which I can never remember, all done with the rumbling of trams in my ears.

The only thing that I felt was missing was the smell of a Trabant chugging up the hill beside me! They are really very noticeable through their absence!

I walked through the door of the Pető Institute with my head held high, I did not have to sneak in like I had had to do ten years ago, and from the first moment the atmosphere was almost electric. An atmosphere had been created that any conductor would be proud to have achieved in their group.

There followed a continuous bumping into old friends, mostly from twenty years ago! It was like we had always been there. Some of my Hungarian friends were visiting for the first time after many years too. This made for a really harmonious singing-of-souls.

During the lunch-break I went up the stairs that for once were not filled with singing children, until I found the red floor and made my way towards my first-ever group, then the spina bifida group. There, in that group, with little Hungarian to my name and in the early months of my training, I soaked up as much through my skin and my soul, as if by osmosis, as I could. I believe that many students and conductors had singing, happy souls working in that particular group and that is why we all get attracted like a magnet back there, and why when I opened the door today Laci básci had beaten me to it. He was already there enjoying being back home too.

Laci bácsi had been a special friend to me during the early months in Budapest because he was learning English at about the same rate as I was learning Hungarian. Sometimes as he gave me a lift in his brown Láda he would give me a Hungarian lesson.

I am sad to say that his English today is far better than my Hungarian is nowadays, but, never-the-less, as in Rome you do as the Romans and today I insisted that we speak Hungarian!

When I was still at work in Nürnberg on Thursday, my colleagues were teasing me and insisted that we spoke Hungarian together in the lunch-break. They thought that I needed to practise, but I could not utter one word. My mind went blank.

I travelled to Budapest with a Hungarian colleague and still our common language remained German, until Friday morning when I walked through that door at the Pető András Institute. It was like one switch was turned off and another turned on.

My two languages today were English and Hungarian, it appears that I still cannot deal with all three at once so I had automatically switched German off.

The conference was in Hungarian. I decided that I would manage the introductions without a headset for translation, but I asked for one later, just in case, for when the lectures began.

I managed so well when Mihály Szivos Ph.D., from The Hungarian Ministry of Sciences, was speaking about the significance of unspoken knowledge in general pedagogy and Conductive Education. I did just as well, if not better, when Franz Schaffhauser Ph.D. spoke on the philosophy and pedagogy of inclusion.

The going got tough when Dr Ildikó Kissné Horváth, from the Ministry, was at the podium. Everyone in the audience I think realised, even before she told us at the end of her speech, that she had not known that the Institute worked mainly with disabled children and apologised for preparing a presentation about rehabilitation with adults. This lady spoke really quickly so I finally decided that I must reach for the head-phones.

I then did what I always did as a trainee conductor, I held one ear piece to my ear and kept the other ear free to get the gist in real life, in Hungarian! I find it so important when listening to a speaker to hear how they actually say what they say, and despite it being very tiring with two ears listening to two different people I get more out of it than just hearing it in English.

A favourite voice from the past

As I put the headset to my ear I got such a lovely surprise. Twenty-four years, almost to the day, since I first met her, I heard once again the voice of our regular translator. Ratz Kati translated for us British trainees from the word go which was in 1987. She was our favourite translator. She knew so much about Conductive Education, even then in the early days, so she knew how to translate lots of the in-house terms that usually mean nothing to an outsider. She also knew how to translate what we said in English into the Hungarian Conductive Language

Anyone watching me today would have wondered what the translator was saying to make such a huge grin cross my face. As I sought her out later just as big a grin crossed her face in the moment that we met.

It was Kati’s non-English speaking, school-teacher sister who I had spent a lot of time with in Budapest she had taught me to speak Hungarian in two lessons a week for four years. This day in 2011 was the first time that Kati discovered what a good job her sister had done. Previously we had only spoken English with each other but today we spoke Hungarian.

Today I was very appreciative Zsuzsa’s patience and infective enthusiasm while teaching me so long ago. Speaking the Hungarian language somehow allowed me to feel even more comfortable and at home in the place that I spent four of the happiest years of my life.

With the lovely one-day conference over a weekend of meetings could begin.

I had meetings planned with hopefully two of AP’s first students, from 1947. A dip in the Gellert baths, a trip up to the castle and a long visit to the Mária Hári Library.

Back to the present

I loved trimming up that five-year-old blog for re-posting. It has made me look forward even more to the 9th World Congress and I am hoping there will be even more of my old friends to meet than on that last occasion. I know there will be some interesting presentation to attend.

I know we all have lots of work to get through until we get there, with Christmas coming up to it is a bit hectic, but Hungary look out, here we all come! Many of us coming home with joy in our hearts.