The teams around us all 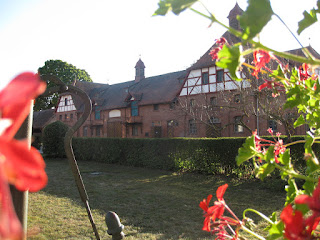 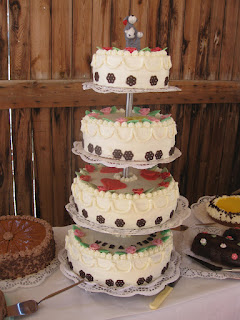 All children need a team around them and all adults too, whether disabled or not.

Yesterday was a day when I realised once again how lucky I am to have been involved in the team around a few very special children, now young adults, and as a result of being a part of their teams I have some very special people in my own team in Germany too!

Let me tell you the stories!

When I first arrived in Germany the first friends that I made all had children of a similar age to my sister’s children. As with my sister’s children I also had a role to play in the upbringing of the children of my new friends. Over the years these friends became my German family. In one case the child, already a young adult asked whether I could help with conversational English and I ended up becoming very good friends with his mother.

Time is the essence

I work with children but I have no children of my own, I am an artist, I speak English better than German and, in those first years in Germany, I had less work than I have now.

I am interested in children, I often had, and still have some spare time, I have shelves stacked with boxes full of arty/crafty materials, I had a video camera and even clay and a kiln, and I had a small studio in the garden. I also speak a language that the German children were just discovering. They soon began to realise its importance in their lives, especially when they began to use computers. So they liked to speak English with me and still do. We played scrabble with an English board too.

In turn the children loved helping me to learn their language and, as they got older, I helped them with their Abitur projects, learning a lot about film, wild horses, and Nürnberg's win city of Glasgow. I think that I proof-read at least five Abitur English projects in the late 1990s and early 2000s.

These children who played such an important role in my life are now all in their late twenties. Four of them will be thirty at their next birthday. Yes, that makes me feel old but it also gives me so much pleasure when I realise that I still have regular contact with some very special young people who always include me in the special events in their lives –

A young German man is involved, through his business, with the production of my books

My niece phoned me recently to make sure that I could get time off to attend her mid-week wedding next month, and I think there will be one or two more wedding invitations to come.

The special relationships that have developed with these young people have certainly contributed to the continued friendship that I have with their parents and their siblings, and I am so grateful for this. It makes a return to Germany so much easier when I know that I have family here too.

I have just had a very good reason for returning to Germany a few days earlier than I would normally have done before work starts on Monday. One of these special children in my life had invited me to her wedding.

A very happy day for all

There was a special moment during the reception when the bridal pair asked guests to stand up if they could answer Yes to any of the questions on their long list. They would then take this opportunity to introduce the standing guests to the rest of the party. I rose to the question “Who takes part in more sporting activity than they watch?”

As I do not attend a football match each Saturday and do not own a television I decided that this was my time to stand up, because of my daily twenty-kilometers to and from work by bike – although I felt a bit of a cheat because, while I was at home in England over the past eleven days, I spent a lot more time watching the Paralympic Games, both live on TV and live in person,  than I have riding a bike!

The groom began the introduction by saying that he had met Susie at his wife’s house often, ever since he had known the family, but had never known quite why I was there! The bride took over and she told our story and described the hours that we had spent together while her dad shared some hours making music with my partner,and she and I were creative together. I then had the opportunity to tell the others how she and her family became my German family and how very grateful I am that I have them.

It is a privilege to be part of an upbringing-team

It was the first wedding that I have attended where the guests have been introduced in this way. Not only did we get to know the people sitting opposite us rather faster than we would have done otherwise, it was also an opportunity for these newly-weds to tell everyone about the special roles that their guests had played in their upbringing and their developing lives. It also gave us, the guests, the opportunity to voice our appreciation for being allowed to take an active part in their lives.

This family again welcomed me back with open arms to the country where I choose to live. With the wedding as part of the welcoming party I was soon back into the German culture and language, and my lifestyle.

I have never seen such a huge array of cakes as I saw at the wedding yesterday. 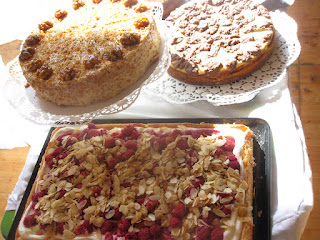 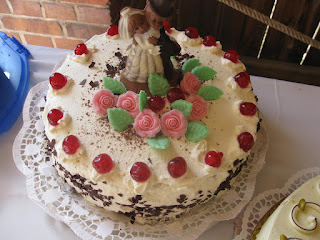 Coffee and cakes – you cannot get much more German than that. The cakes that were on display yesterday, all created by the guests, were a treat for any creative eye, whether you enjoy eating them or not.

The mums and dads of the bride and groom where so well organised. They had anticipated that there would be cake-leftovers so there were cake-bags all ready to hand as the guests said their thank-yous and goodbyes.

Afternoon tea in my own household today will include a slice of that amazing homemade (by an auntie and cousins), wedding cake! As I drink my English tea and eat my German cake I shall be reminded of  those upbringing- and lifestyle-teams that are so important to us all.

The Abitur is the German school-leavers' exam, covering all subjects and including three special ones. In some cases the special projects can be done in English if the pupil chooses.
Posted by Susie Mallett at 15:43