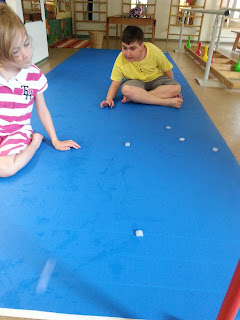 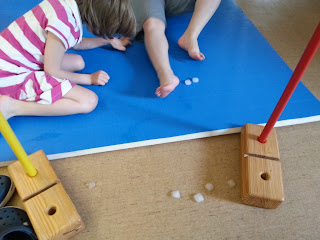 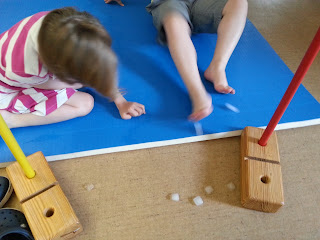 31 degrees is hot by anyone's standards but with a two-hour maths exam behind them at school it is no wonder that thoughts of a lying programme were far from our children's thoughts. Even those not at grammar school did not have much spare energy after a day behind the school desk, not even to go outside to water the vegetable patch.


On Friday it was surprising how soon the maths exam and the heat were forgotten once the ice cubes came out.

After the cool facecloths had brought the children back to life they no longer wished to lie sleepily on the mat so they invented their own version of ice hockey. The conductive input was that they could not use any tools as sticks or racquets, only use of feet, fists or finger-flicking was allowed.


It was fun. I was in goal, my job was to slide the ice pucks back into play. The game was only over when we ran out of ice. There was not much clearing up to do either as the heat soon dried up the puddles made by the melting ice.


It was lovely to watch how active the children became once they had cooled off. Their passion for invention made them forget their exhaustion.

Walking tasks and some cycling followed on from the hockey and then came requests for cooling footbaths while we carried on preparing for next Sunday when the children wish to sell their crafty creations at our twenty years of Conductive Education celebrations.


Even though the children were wide awake again still no one was willing to go out in the heat to water the garden. That did not matter as at least they were enjoying their activities and the heat of the school day was forgotten. I did the watering later in the evening when it got a little cooler, although it was still 27 degrees when I got home at seven-thirty in the evening.


No ice hockey for me at home just the cool breeze on my balcony and a cup of tea.
Posted by Susie Mallett at 21:51