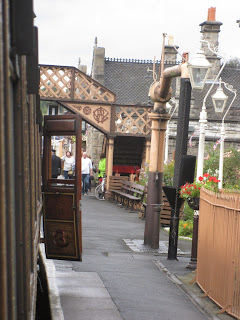 I read about the Model Railway Club of Fürstenfeldbruck in the lovely little booklet about Fürstenfeldbruck that I think was in my yellow Congress Bag. There was little enough time to read the Programme or delve into the Abstract Book, that were also in that bag, let alone look at the tourist information during the Congress, so it was only on the train home that I found out about what else I had missed.

How pleased I was when I read further and discovered that the museum closes each year for a few weeks and this was exactly the time that I was in Fürstenfeldbruck. I would have been furious if I had missed visiting a museum all about trains that was under my nose, at Bahnhofstrasse 20, right on the route to the Congress venue.

I know that there was at least one other railway enthusiast at the Congress. If I had known about the museum before-hand I would have tried to organise a pre-congress visit for several participants!

Perhaps I will make a return trip to Fürstenfeldbruck one day soon, during the open season of the Museum. I would also like to have time to look around the cloister and its church too, other things that in the Cngress there was just not enough time to do properly.

Thank you, Susie, for drawing this to my attention. Like yourself I had altogether failed to look through the excellent guide to Fürstenfeldbruck that the congress organisers had thoughtfully provided me, and now realise what a nice little town I had almost completely missed.

The Club that you mention would have made for a particularly welcome experience since, as far as I could see, there was nothing at all of railway interest in the Congress itself. (I also now see that inter alia the town has a couple of interesting memorials/monuments in different ways well worth a visit and respect.)

The club that you mention displays not simply contemporary and historical model railways but also runs a small Feldbahn. Oh joy. On the one hand, though, I am deeply disappointed to have missed all this. Like you, therefore, I am almost pleased to see that it was closed for the whole of October! This is a most complex and contradictory emotion, difficult to convey in simple terms.

There are such wonderful words in German, compounds expressing emotions and situations quite beyond the prosaic English language. To give a simple and immediately recognisable concept as an example:

('Total confidence that a newly opened restaurant is doomed to fail')

Is there also a word to express 'Terrible disappointment at not being able to doing something that one would have enjoyed immensely, mitigated by knowing that to do so would not have been possible in the first place'?

There must all sorts of situations where such a word might come in most handy.

I also suppose that both the examples offered here express feelings that might distantly relate to the more familiar Schadenfreude.

'The German language is sufficiently copious and productive to furnish native words for any idea that can be expressed at all.'

Had he been British, and not so serious, I might might wondered whether he meant this ironically.