The Flying-Conductor is home to roost 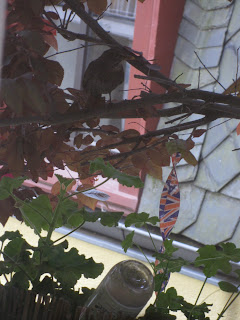 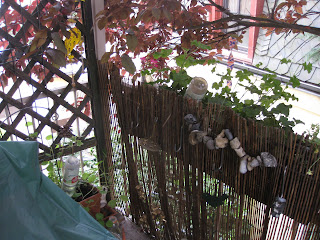 While in England I saw my Dad, Aimee and the rest of the family, a few friends and the Norwich Peregrines. I risked travelling by train and got out from the Norfolk sticks to the Midlands and back without any delays, despite being evacuated from one station due to a fire!

Unfortunately I saw the sea only from the plane and the Queen only on the television but I experienced Viennese waltzing, and Klimt and Schiele paintings, first hand in Austria!

I was glad to have caught sight of the Norfolk birds and experienced some Queen’s Jubilee fever, even though I missed all the street parties. By the time the British began partying in the streets I was enjoying Viennese culture and eating Dobos Torte with a picture of Klimt’s painting, The Kiss, on the top.

More about the travels later, this is supposed to be about birds.

I tried my best to follow the life of the peregrines at Norwich Cathedral after I left Norwich but I had only seen a few glimpses of the chick’s darkening feathers on the webcam and did not have the opportunity to read the messages on the Forum for several days. Therefore I had not realised earlier that there were such concerns for the health of the smallest of the three chicks.

As I tuned in to the peregrines on Sunday morning I thought at first that one of the chicks had already flown the nest, Sunday being the day that the experts in the peregrine-watching tent in Norwich had told me is the expected fledging day. I soon realized that one bird, the smaller of the two male birds, had died in the early hours of the morning. The remaining two have since spent most of the day flapping around their nest-box and on the ledge, preening away the last fluffy feathers and receiving food from the parent birds.

When I had come home for a few hours at the beginning of the week, to swap suitcases before heading off to Austria, I was nearly hit, full in the face, by a frightened blackbird as I stepped out on to my tiny balcony.

I noticed that the blackbirds that I have often seen hopping around in the trees nearby had been digging up the herbs from my plant pots. Last spring I had prevented these birds from messing up the patio below with their pickings from my window-boxes by quickly planting strawberries and geraniums. The birds left the boxes alone this year but it appeared that they had hopped down to a lower level to help themselves to nest-building material from the pots on the wooden, decking floor.

Before I continued with my around-Europe-in-fifteen-days trip I cleared up the mess, watered the plants, and forgot about it.

On Sunday morning I went out to see what was happening in my tree-decked balcony-world outside the kitchen door. I had checked whether I needed to water anything and pulled off a few dead leaves before I discovered a nest in the window-box at the furthest point from the door, snuggled in the soil beyond the geraniums where one of last year’s strawberries had been struggling to survive.

It is a blackbird’s nest and it belongs to those messy blackbirds that hop around my balcony picking at my pots!

It was empty when I discovered it but that was no surprise to me as it was so newly built.

There had been no sign of it at the beginning of the week. It is quite unbelievable that in the space of just five days such an architectural wonder can be built by two small birds.

I wondered whether I had disturbed the owners of the nest with my comings and goings since I returned home to my own roost, and I feared that they may abandon it. I checked at regular intervals but there was no sign of life, then at lunch-time today I saw a beak and a tail poking up amongst the geranium leaves.

A few hours later I peered out of the window and noticed that the nest was empty again. Oh dear, had I disturbed them when I opened the fridge door? Or when I put on the light?

What a distraction these new neighbours will be if they decide to stay.

As there was no one on the nest to disturb I opened the door to let in the fresh air and I had another peep at the beautifully lined, perfectly round and very clean and tidy nest. Low and behold, during the short time that the nest had been occupied, bright blue egg-number-one had been laid. It is in the middle of the nest and there hardly looks to be enough room for any more to join it. But more there are sure to be as no one is keeping this one warm yet.

The egg is not oval like a hen’s egg but fatter at one end and much more pointy at the other. So when it rolls it will roll around in a circle inside the nest.

An hour or so later, in a pause from peregrine-watching on the Internet, I checked up on the blackbird’s nest. I noticed the mum bird perched on a branch beside her nest watching me through the door with one beady eye, with the other one on her beautiful egg in the just-as-beautiful nest. She seemed not to be afraid of me only a little protective.

‘That’s nice’, I thought, ‘She is not afraid, perhaps I really will have lots of company again this summer’.
I am not sure whether when summer comes and the cold dreary days like today pass by, that I will be just as happy to have company because I doubt that I will be able to sit outside in my chair that is placed all of twelve inches, that’s thirty centimetres, from the nest, but it is exciting enough to put up with it for a few weeks.

This is the first time that I have seen bird’s eggs this closely since I was a child when my dad lifted me up to see a nest full of blue-tit’s eggs in one of the many nest-boxes in our garden.

It is Monday morning and the Norfolk peregrines are still on their nesting platform, and as I write there is still only one egg in the Nürnberg blackbirds’ nest. I have every hope that there will soon be two eggs as Mrs Blackbird has just returned!